All kinds of stupid here 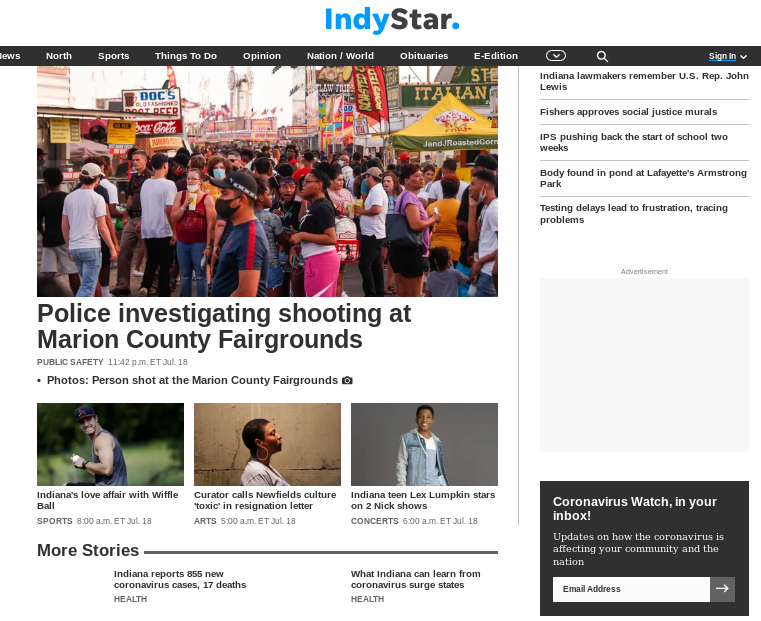 This whole thing is just disgusting. The linked article is the last in a trail where the Diocese of Lafayette triangulates which horrible stances are the least objectionable to society at large yet play to the worst tribal instincts of the indoctrinated.

As reported in the Indianapolis Star, a church leader attacked the Black Lives Matter movement. On June 28th, Rev. Theodore Rothrock from St. Elizabeth Seton Catholic Church in Carmel was comfortable enough in his casual racism that he published the following as part of his weekly message on the church website.

The only lives that matter are their own and the only power they seek is their own," Rothrock wrote in his weekly message on Sunday, June 28. "They are wolves in wolves clothing, masked thieves and bandits, seeking only to devour the life of the poor and profit from the fear of others. They are maggots and parasites at best, feeding off the isolation of addiction and broken families, and offering to replace any current frustration and anxiety with more misery and greater resentment.

The use of dehumanising language by anyone is objectionable and innapropriate. That it was done by a church leader in an official church forum is something to be condemned in the strongest possible way. What kind of moral stance is Rev. Rothrock teaching to his flock?

The local community got wind of his views and criticized them for what they were. This led to his suspension by Bishop Doherty along with a touch of racism is bad, okay?

A non-apology by Rev. Rothrock followed.

"It was not my intention to offend anyone," he wrote, "and I am sorry that my words have caused any hurt to anyone."

There is no admission that what he did was wrong or that he was sorry for doing it. It was in no way a sincere apology or a show of remorse for his actions. This is the kind of response one would expect from a politician and their dog whistles. Is this what the Catholic Church expects of people in the confessional? Their priests?

There were protests outside St. Elizabeth Seton as a result. I fully support those from the local community and those in the church who condemn the casual racism in Rev. Rothrock's remarks and those of the counter protesters. Clearly, those who behave in overtly racist ways must be called to account. At the same time, the silence of those tacitly condoning racism should not allowed to stand without comment. They are part of the problem too.

In the linked article, Bishop Doherty walks back the racism, but still manages to find a way to criticize the BLM movement. It turns out that bigotry and sexism are the kind of family values that the church can expect the community to support.

So there you go. A whoops, our guy let his racism show -- but we can still find tangential ways to hate on BLM. It only took a few weeks.

The BLM movement is far more caring that Rev. Rothrock, Bishop Doherty and those Catholics who spread their own racist, bigotted and misogynistic ways to new generations.

People are not born racist or bigotted, they are taught to be. Some time ago, I made mention that someone in my family was overtly racist. They were excused with the phrase, "That was just how they were raised." When we allow that excuse, those who are excused go on and teach another generation to be racists. It is insideous and needs to be called out for what it is. Then, maybe, we can have a future where people treat each other with respect and dignity. A world where our so-called moral leaders do not dehumanise others through language or actions would be an improvement.

Coronavirus in Indiana: Places of worship can resume in-person service

In which we learn that Gov. Holcomb does not know the difference between the experiment and the control. I suspect that many of the worshipers do not either.

It is a rainy autumnal Sunday in Palmerston North.With the granny smith apples ripe and ready, it is a good day for pie making. We are under level 3 lock down for at least another week and a half, so we are not going anywhere today. Our government has been using science and the advice of trained professionals as they determine their response to the pandemic. Their actions, with the cooperation of a team of 5 million, are working. We have flattened the curve and may be on track to eliminate the virus in Aotearoa.

Yes, there are acute and will be long standing economic effects. For example, international tourism has ceased. When the borders will open again is unknown. At the same time, we all have access to health care (always). The central government provided 12 weeks of wage subsidies right as the lock down was announced. These were not loans. Additional economic support has been promised. As has a plan to change our economy to rely less on just a few industries.

This is not to say that the situation has been easy. It has not. Many are having a very difficult time of it. There is much uncertainty about the future. What will the new normal look like? Even so, a huge majority of the population supports the government and their decisions.

Meanwhile, things look very different in Indiana where I was born. See this article from 1 May 2020.

This archive link for when the above is no longer accessible.

This quote from the article says it all:

"Hoosiers are smart. Don’t treat us like we’re stupid," he said. "We already know social distancing. Trust the public. Give the people the choice to work. If they get sick, it’s on them."

Mr. Lemp seems to be the product of trickle down ignorance. The number of new cases each day continues to increase. There is no indication that the state has this under control or that they are doing enough testing to have accurate counts. It is likely to be much worse than they think it is.

Governor Holcomb might be better off using a lot of science. Instead, he is allowing religious services with no restrictions on gathering sizes starting May 8.  This is sooner than hair salons, and most restaurants (all of which have limitations on capacity).  Priorities are clear.

A lot of uncecessary deaths are on the horizon. Please tell me how the economy will be better for it and why in the world the economy is more important than peoples' physical and mental well being.

My pie is done and it is glorious. On to some chewy oatmeal bickies. Then a nice roast chicken with mexican rice. We are safe, healthy, and in a place lead by smart, humane, and competent people. BTW our prime minister is an agnostic 39 year old unwed mother full of compassion and strength. Priorities matter.